A captured state exposed by a trail of emails in the hundreds of thousands. The #GuptaLeaks made headlines almost every day in major newspapers throughout the quarter. Shocking revelations of kickbacks received to Gupta-linked companies and generous gifts and holidays paid for to secure more lucrative deals just highlighted the corrupt web the ANC finds itself in. 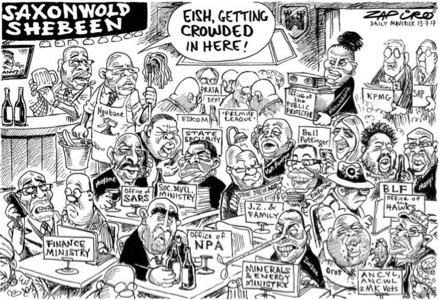 After the 2007 ANC National Conference, a faction of the ANC broke away forming COPE showing their dis-ease with the president elect at the time. In 2013 an expelled youth league president started the EFF as a breakaway party from the ANC. With as much division, it is difficult to imagine a united ANC after their 54th National Conference this December.

We anticipate increased revolutionary rhetoric and policy uncertainty in the run up to December. No candidate can win this election with a ‘business as usual’ campaign.

In June, the Minister of Mineral Resources gazetted a revised mining charter that was widely criticized specifically citing a lack of consultation. The main concern was around BEE ownership of 30% at all times with a clause including naturalized families as BEE benefactors, which suggested a certain family being the major winners. Markets responded badly with resources dropping significantly. Within a week our newly appointed Public Protector sent the Rand into a frenzy when she overreached and called on a constitutional change to the Reserve Bank mandate. On both counts we saw sanity prevail with the Public Protector going as far as following through with her predecessor’s recommendations by opposing Zuma’s application for a review of the State Capture report’s recommendations. These stories will certainly develop leading up to the conference in December.

Globally we saw a victory for the Eurozone as Emanuel Macron became the youngest president of France. With that France remains in the Eurozone and avoided the right wing rhetoric that has become louder over the last couple of years. With Netherlands opting for the Euro earlier in the year - these are positive developments for economic stability in the region. From the European Central Bank comments it would seem as if economic recovery is on track. People are however worried about the possibility of tightening its policy that will lead to reduction in the quantitative easing currently at around €60 billion per month.

Theresa May’s attempt to strengthen the Conservative Party in a snap election, backfired badly. The Tories lost out at the polls and did not secure a majority of the votes; they had to broker a deal with the Democratic Unionist Party to maintain their majority. The Tories had to rethink their strategy on Brexit and plan for a more accommodating approach on their initial “hard Brexit” stance.

Local data reflected that South Africa is officially in recession with two quarters of negative GDP growth. We are the only country out of 41 major economies tracked by the OECD (Organisation for Economic Co-operation and Development) to be in recession. The IMF predicts modest growth of only 1% over the coming year signaling political uncertainty and weak confidence across the board as the main drivers. Weak economic demand also reflects in inflation slowing significantly to 5.1% in June (year-on-year) which led to a 0.25% interest rate cut after quarter end. This would ease the pressure off household budgets and potentially boost retails sales that are very subdued in the current environment.

The graph above suggests that we are our own worst enemy. The RMB/BER Business Confidence Index slumped to the lowest level since 2009. Companies are reluctant to invest into the South African economy and would rather invest in Africa or the rest of the world. Lead economist at Stanlib, Kevin Lings often refers to this graph and mentions that fixing this graph could fix the economy.

Local markets faltered towards the end of the quarter with equities giving away most of the gains made in 2017. This was mainly sparked by the Federal Reserve’s decision to increase interest rates in the United States and a global sell off that ensued. Industrials were the only major index that showed positive returns in the second quarter. Globally, the S&P 500 continued to reach record highs throughout the quarter. The FTSE100 also showed signs of recovery – the index rose 10% in 2017 in dollar terms. 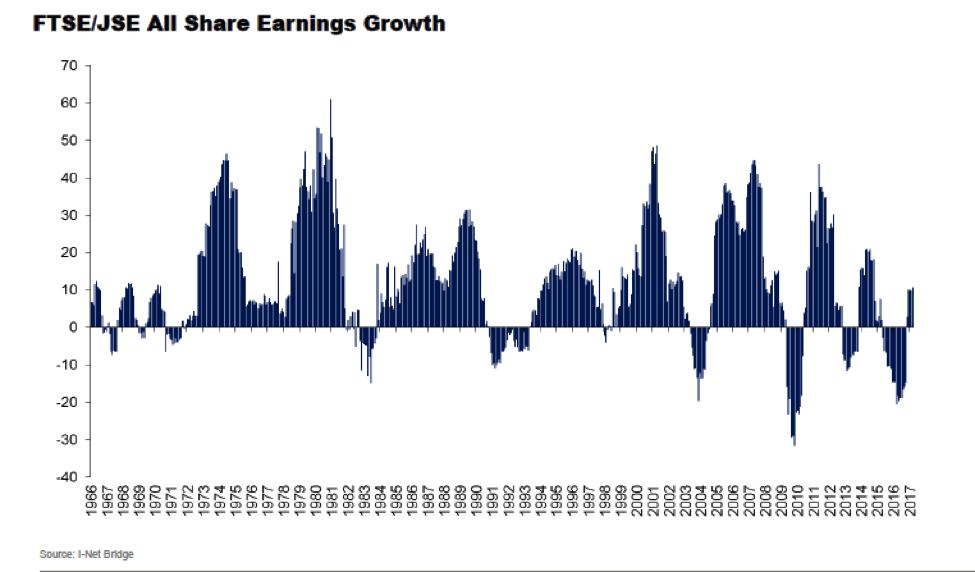 As we saw in the first quarter that the Price-to-Earnings ratio is normalising we see continued positive earnings growth reported by companies listed on the JSE. Earnings estimates were at record highs in May, mainly driven by resource counters. Analysts are suggesting that this has more to do with the increase in the price of minerals itself, and very little with South Africa. As the economic outlook improves throughout Europe and the United States there is potential for an uptick locally.

In a world where news has become so politicized, it is difficult to focus on economic drivers. If we filter out the noise there are signs of improvement in sentiment towards equity markets globally backed by firm fundamentals. Most of the world is growing steadily.

With turbulent times ahead for the ANC leading up to a potential secret ballot in August and tougher times in December we finish off with a quote by one of the greatest leaders of all time, Nelson Mandela: “After climbing a great hill, one only finds that there are many more hills to climb.”