Local elections, inflation and the threat of a new variant grabbed most of the headlines as we ended off 2021. Governments across the world diverged, and continue to, on their approach to both the Covid pandemic as well as their stance on monetary policy. The effectiveness of covid-zero policies in countries like China & Australia has been questioned as other countries start planning for a world where Covid is part of reality. Policymakers have also battled to curb inflation and the divergence across countries will only become clearer as the year moves along. Let’s have a look at some of the major headlines that are driving markets.

Omicron – the new variant that might signal the end.

In November of 202,1 the discovery of the Omicron variant sent shockwaves through the world. The variant was discovered in South Africa and unfortunately, it meant that travel bans were imposed on Southern Africa by most of the developed world. The impact was detrimental in light of the holiday season, with tourists cancelling trips all over.

Data suggests that the new variant is more transmissible but less severe than prior variants; hospitalizations have not been nearly as high as during previous waves, especially for those already vaccinated. Although the progression of the virus looks to be evolving into an endemic disease, the World Health Organization maintains that it is too early to conclude. The constant lockdowns in certain parts of the world continue to disrupt the global supply chain - this puts inflationary pressure on prices due to supply shortages that are felt across sectors.

Inflation, what will be done?

Prices are increasing at a rapid rate in most parts of the world and monetary authorities are battling; decisions need to be made on whether to raise interest rates to curb inflation or to wait and see whether it will be transitory. The graph below illustrates the rapid rise of inflation in the United States throughout the pandemic, with prices rising by up to 7% at the end of 2021. US inflation now runs ahead of SA inflation which is extremely unusual.

Another major concern is the rising oil price that further puts pressure on inflation. Analysts in the market now think it’s a question of when, not if, oil hits $100 a barrel for the first time since 2014. The graph below signals the surge in the oil price in the back half of the fourth quarter. 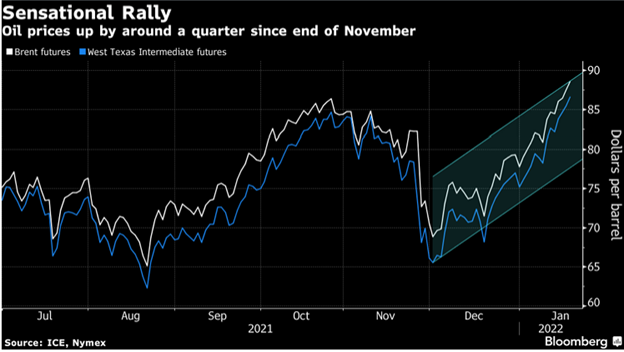 All these factors point to an unwind in stimulatory measures and possible interest rate increases throughout the year. In America, the Federal Reserve Bank could start raising interest rates a lot sooner than investors initially thought, which is currently causing concern for equity markets across the world. The South African Reserve Bank started raising rates late last year. This will be a major theme throughout this year and one of the biggest risks for the continued rise in equity prices.

Coalition governments: Everybody but the ANC

In November, South Africans made their mark at the ballot box in the local municipal elections. Low voter turnout was of major concern with many staying away, thereby highlighting their grievances against the ruling party. The biggest loser in the elections was the ANC. They lost key metros during the voting process and it was further worsened when opposition parties formed an “everyone but the ANC” coalition in major metros, putting the ANC in opposition benches. Whilst the effectiveness of coalition governments is widely criticized this is a major opportunity for smaller parties to show their worth.

In his bid for a second term as president, President Ramaphosa will need to manoeuvre carefully if he plans to secure his stay. The year started with Lindiwe Sisulu’s attack on the judiciary, which sets the tone for what we can expect in the run-up to the ANC elective conference in December. How swiftly Ramaphosa deals with this will highlight whether he has the support within the ANC to make much-needed decisions.  Whatever his strategy, we should expect plenty of political noise this year.

A standout year for SA investors

JSE sector returns show a broad-based recovery as financials, industrials and resources showed growth well over 25% in 2021. For the first time since 2017 South African equities outperformed Global equities. Emerging Markets had a disappointing year as concerns around the slowdown in China put a damper on returns. As an emerging market country, SA outperformed our peers by roughly 20% during 2021. Local property recovered some of its losses and was the best performing asset class up 37% in 2021. Cash yielded around 4% as interest rates remained at historic lows.

Interesting to note is that local equities have now delivered an average return of 11.4% over the last 5 years, putting the long-term return in line with expectations and well ahead of inflation and cash returns.

Our client portfolios at Foundation had an exceptional year.   A balanced approach - namely a good blend of local and offshore assets spread among asset classes - yielded desirable results ensuring that our clients met their respective goals. Our clients’ portfolio returns are now generally tracking their long-term assumptions, as set out in original planning which is testament to staying invested throughout the pandemic.

The returns from global equities of 14.4% per year over the past five years in USD, is unlikely to be repeated. Investors should expect these returns to reduce significantly over the coming years as financial conditions become more restrictive.; It is likely that US investor in particular, will be disappointed by equity returns relative to their current high expectations.

Rising markets and loose monetary policy have helped to create an 'everything goes up’ mentality – crypto currencies, tech stocks & NFT’s (non-fundable tokens) were the beneficiaries of this easy money - but stricter monetary policy conditions will change the trading environment.

Warren Buffett says, “It's only when the tide goes out that you learn who has been swimming naked.” In simple terms, things may look good rosy at this point, but beware if you are leveraging too much on the expectation that the waves will continue to rise; instead, the tide may go out and poor strategy will be exposed. Careful portfolio construction and asset allocation will be critical in the next phase.